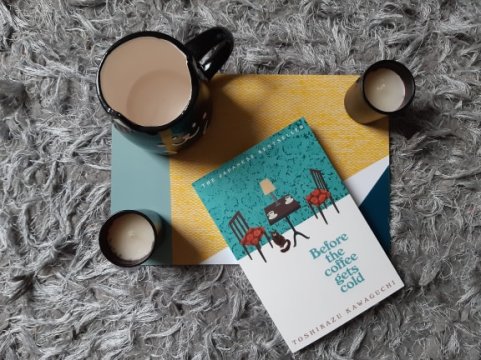 Whilst I love to sample literature from all around the world, there is something about Japanese literature that particularly intrigues me, and I would love to visit the country one day. Before the Coffee Gets Cold was a bestseller in Japan, and since I’ve mostly read more classic pieces of Japanese literature, I was interested to try something a little more recent. This one had mixed reviews, but the concept caught my attention, so I decided to give it a go for myself, and I’m so glad I did – this was the most poignant, enriching reading experience I’ve had for a while and I couldn’t believe how much emotion it drew from me.

Told in four stories that are slowly revealed to be intertwining, the book surrounds a basement cafe in Japan where time travel is rumoured to be possible. There are a number of strict rules that prevent the majority of people from time travelling, but our four protagonists do not allow this to put them off, for one reason or another. The relationship between lovers, husband and wife, sisters and mother and child are explored with delicacy and emotion. Regret is one of the main themes that is explored, with the characters often questioning their own decisions and lamenting over the decisions of others. I have no shame in admitting the book made me cry over and over again, effectively acting as a sucker punch to my heart. The final story, about mother and child, in particular had me sobbing everywhere, much to the disdain of the other people on the train.

The character development and the relationships between the characters have you rooting for each of them separately and as a unit, and I became particularly fond of a few of them, including Kazu, who maintains a cool exterior for the benefit of her friends, whilst secretly hoping for the best each time. A few of the characters could be accused of being somewhat unlikeable, but as they spend more time in the company of our cafe crew, they appear to become more favourable and understand why some of their actions could be construed as unfeeling.

The book tackles a number of real world issues sensitively, and succeeds in pulling on my heart strings, especially as I work with people with dementia, so can sympathise with the husband and wife story. At no point did I feel I was being bombarded with too much, however, as everything that was included was relevant. However, if you have been personally affected by any of the content warnings mentioned, I’d potentially skip over it, as there is very limited relief from the tragedy that is explored throughout the book.

There are not many books that have given me the feeling I got from this one, which makes it something particularly special, and I will be adding it to my repertoire of books I throw at people when they ask for recommendations. It is a fantastic example of how whimsy and magical realism can be successful in a novel, without being overbearing and it is dripping with poignancy. I simply could not recommend this one more, and although it is still early in the year, I have a feeling this one could be a contender for my top ten books of the year.