My February to be read pile appears to be getting more and more ambitious by the second, so I thought I’d post it as it is before it gets even more out of hand. I’m not claiming that I will be able to get through all of these in February, especially as I’m also doing my Reimagining the Women’s Prize project, but this will provide a reference for when I’m picking out my next read. Please feel free to make any recommendations, or let me know what you’ll be reading in February in the comments!

‘American Dirt’ by Jeanine Cummins was on my list for my most anticipated reads for January 2020, and I received it in the mail recently. Upon starting it, I began to hear some negative reviews from the Latinx community, so I decided to research into it further. It turns out that ‘American Dirt’ is not own voices and is actually problematic and racist, and Cummins perpetuates troubling stereotypes. It is entirely my fault for not properly researching the book and author, and going off initial reviews and synopsis alone, and now I would like to read some recommended own voices stories from the Latinx community. Dominicana was widely recommended, so I quickly preordered it on the 22nd January to boost the preorder sales before it was released on the 23rd. I will be reading and reviewing it in February.

Even if this book wasn’t written by Kazuo Ishiguro’s daughter, I would want to pick it up and read it, because the synopsis sounds magical. It is a short story collection that sounds delightfully speculative, and the concept reminds me slightly of ‘Picnic in the Storm’ by Yukiko Motoya, which I reviewed here.

3. My Past Is a Foreign Country by Zeba Talkhani – Released 6th February 2020

The more I read about feminism, the more I want to get different perspectives from around the world, and this book certainly fits the bill as Zeba recalls growing up in Saudi Arabia. I imagine it will include a mixture of politics, feminism and anecdotes, and I feel intersectionality in feminism is important, so this has been on the list since I found out about it. 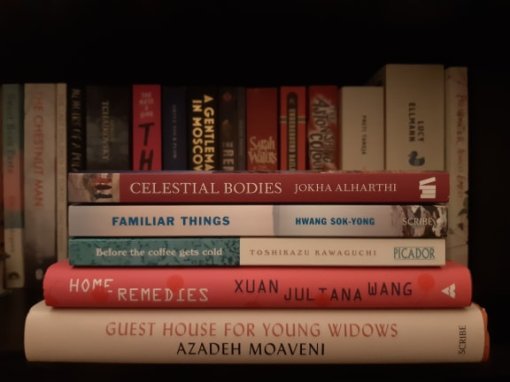 I bought this because it won the Man Booker International Prize last year, and having never read any literature from Oman before, was extremely intrigued. It is a family saga following three sisters, all the while discussing the progress of the country itself.

This book follows Bugeye and his mother who have been driven out of the city of Seoul by poverty after his father’s internment in a government ‘re-education camp’. Reading more books from places that are not the UK or US is one of my aims for this year, and this month I am focusing especially on the continent of Asia.

3. Before the Coffee Gets Cold by Toshikazu Kawaguchi

Japanese literature tends to be one of my favourite types, but recently I have been neglecting it in favour of other things, so this month, with my attempt to read more Asian literature, I have added it to the list. It sounds like it is going to be poignant and speculative, and potentially one that provokes tears.

Another collection of short stories on my to be read list, are we surprised? This one explores the experiences of the new generation of Chinese people and how technology plays a significant role in the lives of youths. Whilst Ishiguro’s collection seems to be speculative, this one seems to be more rooted in reality, which will provide a nice balance.

I predict that this will be a particularly difficult read, as it follows a handful of the young women who have travelled to Syria in order to support ISIS, and the consequences they have faced as a result. However, this is an important topic, and one which we must learn about if we are to end the cycle of fundamentalism.

I don’t normally read many romance novels, but as it is February, the month of love, I thought I would give a handful of popular romance books a chance. These are the ones I have chosen to read and review, and if I enjoy them, I may delve further into the genre.

1. Get a Life, Chloe Brown by Talia Hibbert

This book follows Chloe Brown who is chronically ill, and her crafting of a bucket list in order to literally ‘get a life’. This books sounds diverse and representative, and I’m excited to read it at the beginning of February.

2. The Love and Lies of Rukhsana Ali by Sabina Khan

Rukhsana is sent to Bangladesh by her conservative Muslim parents after she is caught kissing her girlfriend, and this book follows familial bonds, family secrets, queerness and acceptance. It is probably the book I am most excited about, despite it being for a young adult audience, because I have seen only positive reviews.

3. The Kiss Quotient by Helen Hoang

This book does concern maths, which happens to be my least favourite topic in the whole entire world, and no I’m not exaggerating, I really hate maths. However, it is own voices for Autism Spectrum Disorder, so I desperately wanted to give it a chance, and will be doing so this February. If I enjoy this one, I will most likely also get to Helen Hoang’s next book in this loosely related series, ‘The Bride Test’.

4. The Flatshare by Beth O’Leary

Initially I thought the concept of this book was a bit weird, bordering on creepy, but I’ve seen so many positive reviews for it, that when I decided to choose some romance books to read this February, I ended up choosing this one. I’m hoping it’s more comical than anything, as it will provide some comic relief in between reading several books involving serious topics.