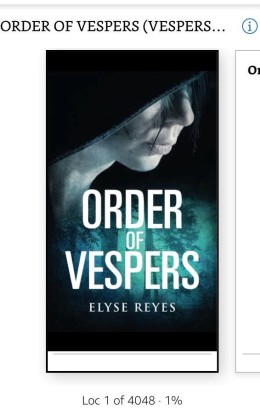 We begin this YA paranormal fantasy novel with the aftermath of an explosion in protagonist Jasper Andrews’ school, which was caused by her own hands. However, not everything is as it seems and we follow a journey of self discovery, enlightenment and revenge with a hint of romance thrown in for good measure.

Initially the story was intriguing with the discovery that there is a secret group of people in the world with special abilities. The parts that touched upon the concepts of good, evil and neutrality were especially interesting and gave a philosophical twist to the book, which was unique and refreshing. I do wish there had been more of this included as these were my favourite parts.

However, the story became muddled with the author not fully exploring each aspect she introduced. For example, it was suggested that Jasper had inherited new powers from her siblings but these were not really discussed any further, leaving quite a large gap in the reader’s knowledge.

Reyes effectively builds each character to have their own recognisable traits and quirks. Mikael and Dakarai are sweet father/brother type figures and Jordy quickly becomes a strong love interest. Whilst the romance was fairly believable for me, although somewhat disastrous in places, I did not believe that someone in Jasper’s position would necessarily say and do the things she did. Throughout the novel she came across as whiny and seemed to care little about the fate of her family after the initial shock.

Something to warn any sticklers for grammar about is that the editing in places is fairly poor. There are quite a few easy to spot mistakes, and at one stage, there is a character name change that goes unexplained – Mikael suddenly becomes Michael for a few pages. This is more of a publishing error than the fault of the author but it definitely pulls you out of the story and makes you confused for a minute.

The reason I did give the book a three stars rather than a two was for the discussions surrounding God, the devil and Il Separatio and for the fact that I did remain interested to see how the story concluded despite its flaws. If you enjoy paranormal romances, I would recommend giving this one a try but I don’t think I will personally be continuing with the series.