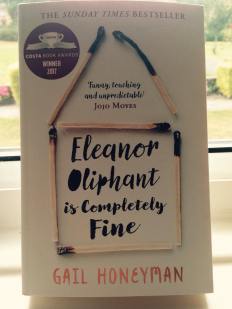 In this story, the endearing, if slightly out of the ordinary character of Eleanor Oliphant attempts to convince the readers that she is completely fine, even when the evidence suggests otherwise. She spends all week knuckling down at work and the weekends at home by herself with a Tesco pizza and her standard two bottles of vodka. She is not lonely. That is, not until she happens upon the handsome singer of a local band, after which her life takes a turn she wasn’t expecting.

From the start of the novel, I was engaged with the language, despite the vocabulary being as over-complicated as Eleanor’s social life. Gail Honeyman finds a way to make the language fit beautifully, and it flows perfectly in a way that made me want to make a swift return to the book whenever I had to put it down.

Some readers have said they struggled with the novel because Eleanor isn’t a likeable character, and I agree that she isn’t at the beginning. However, she has also been through a lot and as we witness her begin to explore who she is, we realise she is actually endearing and caring, and I began to root for her, hoping she would have her happy ending.

Eleanor’s story is difficult to read in places as Honeyman details abuse and loneliness so accurately that you can feel a pool of sadness and anger well up inside you as you’re reading. This ability to evoke emotion in even the toughest of readers suggests that Honeyman is an author to watch in the future – I will certainly be reading whatever she publishes next.

The only minor issue I had with the book was that I predicted what was going to occur at the end. However, based on the many positives outlined above, this was not enough of a problem for me to want to deduct a star. Before I read the book, I was concerned it wouldn’t live up to the hype surrounding it, but I can assure anyone feeling the same way that it does! A solid recommendation from me for this one.